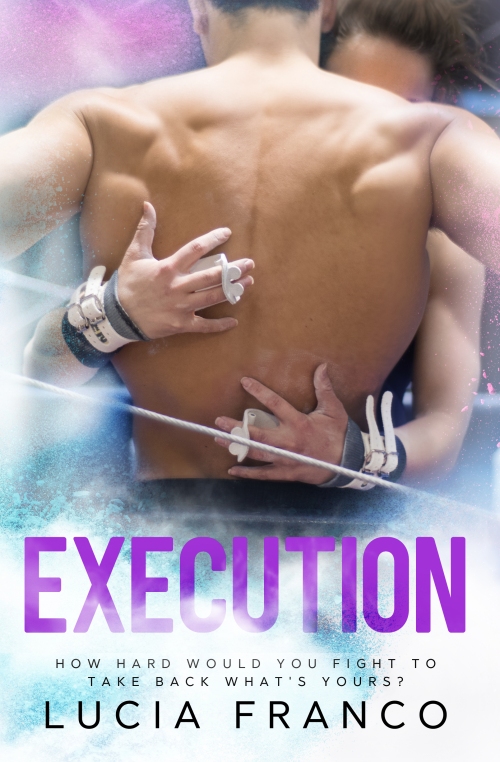 The move to World Cup Academy of Gymnastics is the greatest challenge Adrianna has encountered. Punished for Coach Kova’s overwhelming desires, she’s reeling with resentment while she sits out the first meet of the season. As Adrianna fights to regain her focus, he pushes her body to the extreme, leaving her mentally and physically exhausted.

Kova underestimates Adrianna’s endurance, and gravitates more toward her, despite his internal battle raging within to stay away. They try to disentangle themselves, but the tension between coach and gymnast mounts, engulfing them both in a forbidden world of deception and passion.

The one place where they should never feel alive, is where they find complete absolution. But one slip, one wrong landing, a missed grip, and everything they built can come tumbling down, damaging both their professional and personal lives.

Adrianna and Kova’s story continues in this highly anticipated follow up to Balance, the first book in the Off Balance series…

I have this feeling that Lucia Franco is on a mission to slowly destroy her readers hearts one story at a time with her addictively captivating forbidden romance series that will capture you whole body and soul.

Ever since devouring Balance a few weeks ago…thank goodness I waited to read the first book until closer to the release of Execution because otherwise I would have died a slow and painful death…I have been on the edge of my seat in anticipation for the next book. That cliffhanger at the end had me in a fit of emotions and it certainly did not prepare me for the never ending twists and turns that were thrown our way in Execution. One second I think I finally have things figured out and then BAM…you have no clue what’s going to happen next!

Oh and let’s not forget the fact that my kindle decided to die at the 48% mark and I was left waiting for that dang thing to recharge for what felt like hours. I mean COME ON it was right at a good part too, but at least it gave me time to do a little adulting before I jumped back in. TRUST ME when I say that this is the kind of book that you need to clear your entire schedule for because there is no way you are going to want to put it down.

Execution is the kind of story that will test your limits and have you second guessing which team you are on and as many times as I wanted to slap some sense into him, there is not doubt in my mind that I am still and forever will be TEAM KOVA…although we are currently in a disagreement that I am praying will be resolved in Release, which is schedule to hit our devices on September 24! Let’s just hope that I can wait that long without going CRAZY…oops TOO LATE! 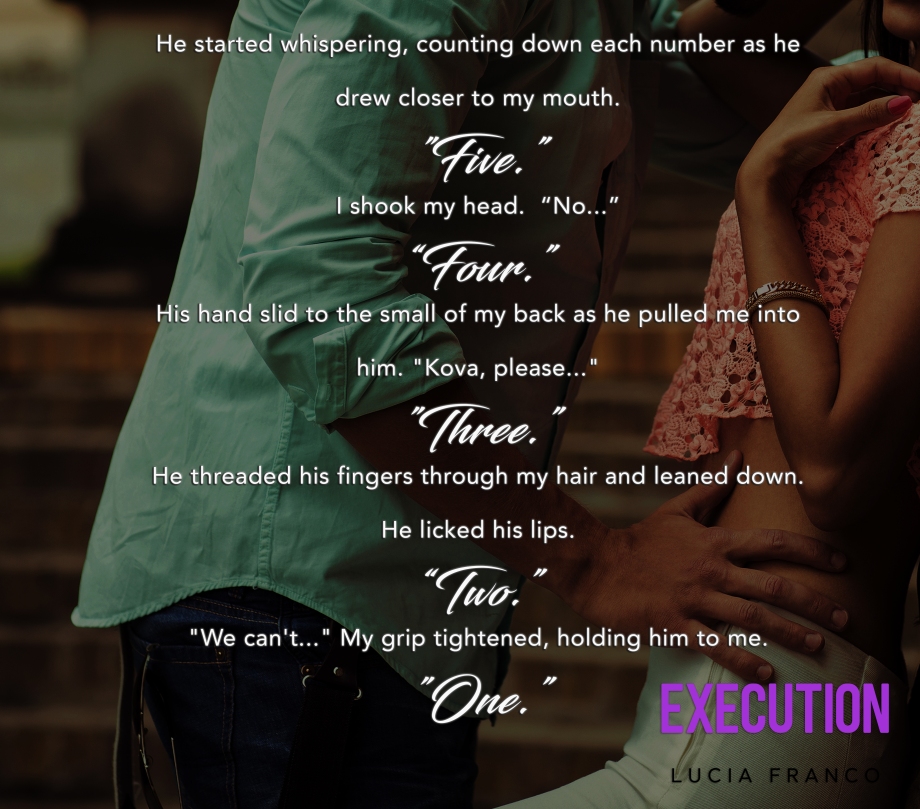 A competitive athlete for over ten years, Lucia Franco currently resides in sunny South Florida with her husband and two boys. Paranormal romance was her first love, but she has a soft spot in her heart for small-town and reunion romance stories.

When Lucia is not hard at work on her next novel, you can find her relaxing with her toes in the sand at a nearby beach.

Find out more about Lucia at authorluciafranco.com. Make sure to join her newsletter to receive exclusive updates and more!

Published by Whoo Gives A Hoot

View all posts by Whoo Gives A Hoot

Finally got my hands on this book and about to dive in right before bed!
Round 2
Family Game Night 🎲 We upgraded to the digital version of monopoly this year.
❅❅❅❅❅ GIVEAWAY AND HOLIDAY HOP ❅❅❅❅❅ We are #MeagansMistresses and we are celebrating the holidays #BrayshawStyle. From the members of Meagan Brandy’s street team - we want to celebrate the holidays with you. Each day until Christmas you will have an opportunity to win. To enter to win an ecopy of any one of Meagan Brandy’s books just comment below. Follow and like all of us for a chance to win the grand prize of a signed set of the Brayshaw series and a Brayshaw hoodie. @briannas_bookshelf @_the_art_of_reading_ @natashareadsbooks @masquereader @cali_gals_book_boyfriends @mrs_kindle_addict @emily.reads_ @queen_of_the_books18 @bookaddicted_shanna @pretty.little.book.blog @all_encompassing_books @fairestreviews @ellesbookblog @littlesteamyreads @romanticreviewer @whoogivesahootblog @booksmackedmel Be sure to watch Meagan’s IG stories daily to see which Mistress to visit next. Grand Prize Winner will be announced on my IG on New Years Eve. #MeagansMistresses #StreetTeam #ItBeginningtoLookALotLikeBrayshaw #ChristmasGiveaway #MeaganBrandy #IGHop #IGReaders #Booklovers #Bookaholics #Braygirls #Giveaway #ReadersofInstagram
When you re-read the WITH ME SERIES by @komal_kant and feel inspired to create some pretty graphics! IMPOSSIBLE (WITH ME SERIES #1): https://amzn.to/2qnPwl8 FALLING FOR HADIE (WITH ME SERIES #2): https://amzn.to/2COvNh9 WRONG SIDE OF TOWN (WITH ME SERIES #3): https://amzn.to/2CSfy2S FIRST CHANCES (WITH ME SERIES #4): https://amzn.to/2XpIit1
I am sick so it’s the perfect time to spend some quality time with MEDICINE MAN by @thesaffronkent!!