“No passion, no emotion, no originality—a train wreck of epic portions.”

Those were the words to describe Eve Thorton’s exhibition. Not even a fine arts degree from Yale or her daddy’s bank account could save her from the scathing reviews. And failure was a word Eve would never be comfortable with. Not even close.

Plotting the demise of every critic who’d written her off was her first instinct. But that would come later. Instead, she would show them that she wasn’t a bored socialite with more money than talent.

She would prove everyone wrong, and she wasn’t afraid to get her hands dirty. But when her journey for redemption crashed headfirst into Josh Logan, the sexy, talented tattooist from Queens, getting her hands dirty took on a whole new meaning.

Josh was everything Eve wasn’t, translating on skin what she couldn’t onto her canvas. All she had to do was convince him to share his jaw-dropping brilliance, and help her—seeing him naked—a bonus. Then she could go back to her regular life, vindicated.

It should have been easy. Pity her plans had a habit of derailing.

Mind blown. Seriously. This is an amazing. Read from beginning to end.

I laughed so much throughout this book. But the story, it’s so real. The emotion, the unlikely pairing. And who doesn’t love a hot tattoo artist 😉

One click and tag this journey to find herself and uncover her true passion with Eve.

How can I possibly express how much I absolutely adored every single moment of T. Gephart’s newest release? It is so freaking hard because I never feel like I am good at expressing my feelings, but I am about to try my best!

First let me just express how much I am freaking in LOVE with this gorgeous cover. If you know me, either through Facebook or my blog, you will probably notice that I am a bit of a COVER WH*RE! I know…I know…never judge a book by a cover, but come on it’s so HARD not to. I mean you’ve seen this cover!

Okay! Now that I’ve gushed about this cover, oh what a gorgeous cover it is, time to get onto the story. Train Wreck by the magnificent T. Gephart was so beautiful and I loved every moment of Eve and Josh’s story. On the outside these two may seem like an unlikely pair, but when you get to know both of them on a deeper level you realize that there aren’t two people more perfect for each other. This beautifully captivating story has stolen my heart and I never wanted it to end.

I feel like there is so much more I want to say and I very well might when my book hangover ends and it all comes back to me, but for now I hope that I have convinced you enough to give this book a try because it is beyond fabulous and yet another extraordinary read from the amazing T. Gephart! 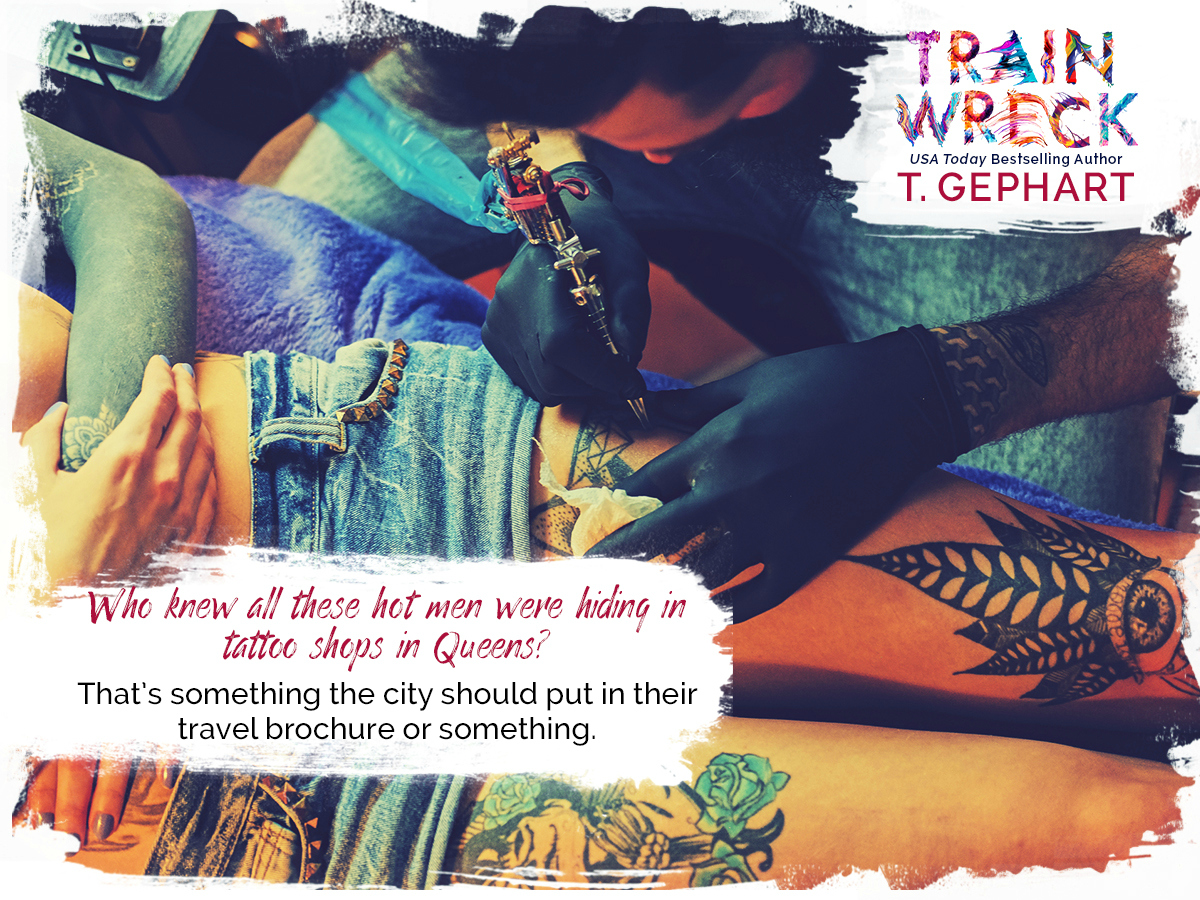 T. Gephart is an indie author from Melbourne, Australia.

T’s approach to life has been somewhat unconventional. Rather than going to University, she jumped on a plane to Los Angeles, USA in search of adventure. While this first trip left her somewhat underwhelmed and largely depleted of funds it fueled her appetite for travel and life experience.

With a rather eclectic resume, which reads more like the fiction she writes than an actual employment history, T struggled to find her niche in the world.

While on a subsequent trip the United States in 1999, T met and married her husband. Their whirlwind courtship and interesting impromptu convenience store wedding set the tone for their life together, which is anything but ordinary. They have lived in Louisiana, Guam and Australia and have traveled extensively throughout the US. T has two beautiful young children and one four legged child, Woodley, the wonder dog.

An avid reader, T became increasingly frustrated by the lack of strong female characters in the books she was reading. She wanted to read about a woman she could identify with, someone strong, independent and confident and who didn’t lack femininity. Out of this need, she decided to pen her first book, A Twist of Fate. T set herself the challenge to write something that was interesting, compelling and yet easy enough to read that was still enjoyable. Pulling from her own past “colorful” experiences and the amazing personalities she has surrounded herself with, she had no shortage of inspiration. With a strong slant on erotic fiction, her core characters are empowered women who don’t have to sacrifice their femininity. She enjoyed the process so much that when it was over she couldn’t let it go.

T loves to travel, laugh and surround herself with colorful characters. This inevitably spills into her writing and makes for an interesting journey – she is well and truly enjoying the ride!

Based on her life experiences, T has plenty of material for her books and has a wealth of ideas to keep you all enthralled.